This page is for people who haven't seen HEENE BOYZ LIVE performance yet.
After reading these, please check "Tour Dates" and come & feel our energy!

"Their sound is what you would imagine the love children of a threeway between Iron Maiden, Megadeth and Tenacious D would sound like. The fact that they are so young and can put on a rock orchestra for over two hours ... is at the very least impressive."

Details Magazine: July 2014 Issue    By Ivan Solotaroff
…when he sings "Chasing Tornadoes," the second number of tomorrow's gig across the state in DeLand. These kids can rock and are especially tight after three years of doing this song at bars and street fairs from Florida to New York. It starts as a slow power-chord drone, accompanied by Falcon's raised fists, blank-eyed stare, and dramatic rendition of the opening lines that's more Kabuki than metal:


Chasing tornadoes tomorrow
In the field of pain and sorrow . . .
If it doesn't bleed, it will not read . . .
Milk the event, sleep in a tent

Handing out flyers to the crowd gathering in the three square blocks that've been roped off for DeLandapalooza. One of Florida's bigger pay-to-play festivals…Several have seen the Heene Boyz before, though. "Man, I saw you kids in Gainesville," says a profusely sweating man with a red mullet and a Black Flag T-shirt. "Kick-ass motherfucking show!"...By the time Falcon screams out the opening "WEL-come to the CROSS-roads of time and space!" the crowd at stage 15 has swelled to more than 200. Halfway through the set, Falcon descends the stage to rock out among them—bumping fists and exchanging devil horns, then exhorting a metalhead in his mid-fifties with a cane, a purple mohawk, anALCOHOLICS UNANIMOUS T-shirt, and an NJoy e-cigarette to "Rise!" He does, slowly on his cane, then joins Falcon's headbanging…

http://rateyourmusic.com/list/MarsHottentot/unofficial_rym_heene_boyz_fanclub_for_noise_heshers/     by MarsHottentot
"The music sits somewhere between Black Sabbath, Black Flag and modern bedroom doom metal. .....the arrangements are actually pretty good - the band are far more interesting than 99% of 'kid bands' that pop up from time to time. .....my favorite, crude Photoshop drawings depicting some kind of larger story - brilliant stuff. "

Heather Hakkarainen (Facebook)
"You guys are amazing!!! I have four children of my own that are home in Michigan and I showed them some of your performance last night and they think you guys are AWESOME!! With all the talent the three of you possess you guys are destine to go places... Keep up the hard work it will pay off some day... VERY IMPRESED !!!!"

Chris Rifkin (Facebook)
"I saw this,those kids put most of the bands I see for opening acts to shame...so friggen tight....give them 5 years and they are going places
Scott Mosher..you seriously had to see this..these kids would have destroyed all those hacks that opened up for LA Guns new years eve a few years ago...they are called Heene Boys"

Edgar Payne of Payne Receptors  (Reverbnation)
"The first track, "American Chill," instantly is making me a fan! First of all, the Wicked FretBoard tapping in the intro, is just Hella Awesome, and Mr. Vocal dude, you have the perfect voice, for this kick Ass music! .........You guys are a Godsend to the Music World/Keep doing what you guys are doing, because you have a new fan in Long Beach C.A.! P.S. Florida became my favorite U.S. state, when I was only 10, and all of my favorite/most inspirstional Death Metal musicians, ALL came from Florida!"

ELVIS PRESLEY  (commented on "Cactus People" - YouTube)
"THIS IS MY ALL TIME FAV! American Chili is 2nd, AWESOME, UNBELIEVABLE! :)"

Shattervox ‏@Shattervox  (Twitter)
17 Apr
"The future of ROCK is here ... The @HeeneBoyz too young to drive, but never too young to ROCK! Keep Rock Alive young men!"

August Randazzo of Infidel  (Facebook)
"These band played after us last Sat and gave the most awesome performance ever. And special thanks to Rio (drummer) to allow part of his gear to my drummer for unexpected technical details and glad was around to lend my bass head to falco (L vocal/bass) which we both come together to succeed for the show.....america should have more children like these as the were the smallest and the most respectful kids I have ever seen and I am glad the future of Metal will still be secure by this wonderful band. Further more...they can show us old timer how to really rock."

Christopher Presley ‏@CElvisPresley (Twitter)
25 Feb
@HeeneBoyz "These boys have heart and class and are passionate about their work! They will be great at whatever they do in their lives."

From here on, they are in a chronological order. 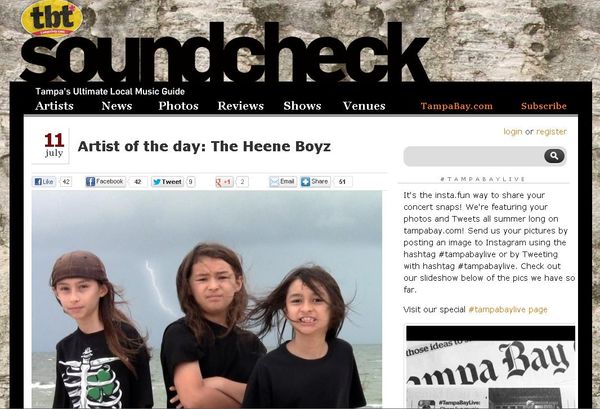 Kim Acoustic (Facebook)
"These kids are adorable and will grow up to be rock stars!" 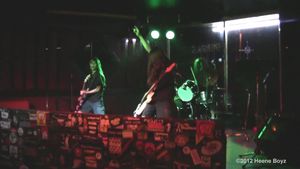 From The Battle of the Bands  July 1, 2012
www.facebook.com/heeneboyz

Kyle J. Leahy (Facebook)
"You guys killed tonight, you had more energy then me and Im 18. Good job!
.....well I loom forward to playing with you gentlemen."

Little Cris Kaufman (Facebook)
"you guys were awosme last night deff. my fav performance so much energy.i really wish i would have started playing guitar that young keep it up and you guys will be unstoppable"

HELLACOOL (Band) (Facebook)
"You guys are awesome, we expect to be seeing you guys on tv in a few years!"

J.T. (Facebook)
"You guys rocked out at The Orpheum keep it up guy"

Little Cris Kaufman (Facebook)
"These kids will rock your Socks Off...i wish i started playing when i was that young they are going to be big some day...so head over to their page and give them a like and a listen so that day can come a little sooner for them Heene Boyz" 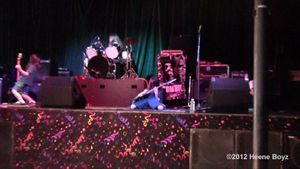 No Name (Interview)
"I think that they are very inspiring being able to do that (perform) in such a young age."

Emily Anne Strange (Interview)
"They are inspiration to younger people and older people. Their energy is just super amazing in the way how they dance and what they bring in the crowd and bring on the stage." 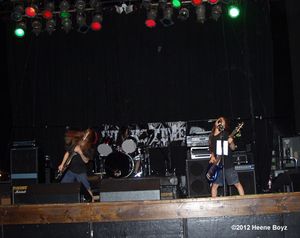 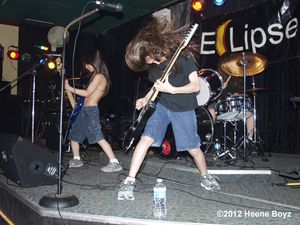 Megan Heather (Facebook)
"You guys rocked it at Virgofest!"

JC. Miller (Facebook)
"I may be awesome, but you guys are amazing can't wait to do it again keep up the bad ass metal... you kids are going to be huge one day"

Donald C. Craver (Facebook)
"These guy's rocked at virgofest 2012. I wanted them to play again all night lol"
Kirsty Mincl (Facebook)  Responding to Donald C. Craver
"Yes indeed, they did!!!!!! Future rockstars for sure!!" 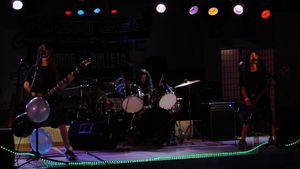 Amanda OnPoint Goldben (Facebook)
"HEENE BOYZ - The youngest metal band Ive ever seen. They were pretty damn good too!! They ranged from age 9-12"

Nathan Pixley (Facebook)
Y'all rocked the Deland fest and I can't wait to see what y'all do next
... I do not see a limit to your potential. ... keep it up

Cheryl Thompson (Facebook)
We saw you Saturday night at the Deland Abbey during the 12th Annual Deland Original Music Festival, and were truly impressed with your performance! There is no doubt you boys will go far! Awesome job, guys!

Dereck Clough (Facebook)
Dude, i saw you guys in deland.. You boyz ROCK!!!
I have told all my friends about you boyz 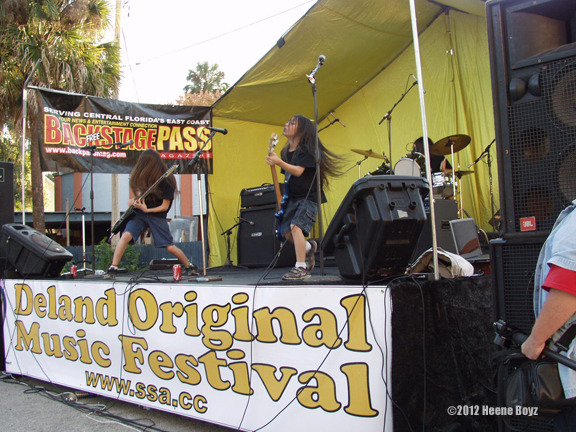 David Duf (Facebook)
I swear, you cats are MURDER! Best band of the whole event!! 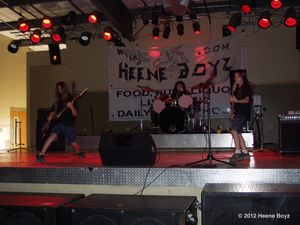 Kris Wooby (Facebook)
i'm sooooooooooooooo digging you guys jams i like again and chasing tornadoes the most so far! \m/

CSAcitizen (YouTube: HEENE BOYZ LIVE 3* - "Chasing Tornadoes" - 4 of 4)
http://www.youtube.com/watch?v=1Lju6pKRSYc
"The Lead guitar fella is so good on the lead..."

Chingi Lingi
"Me and my friend saw one of your videos you guys are awesome! You guys should do like a mini tour here in NYC! So we could go see you guys perform! :D"